Joshua Horvath has been a Chicago based sound designer, composer and music producer since 1998.  He originally hails for the Cleveland area, where he grew up playing in bands and being the opening act for The Violent Femmes, The Goo Goo Dolls, They Might Be Giants, Live, PJ Harvey, and Alanis Morissette.  Josh started designing with The House on the original Rose and the Rime.  Other collaborations with his family include Ploughed Under, The Crownless King, and the 2013 Nutcracker.  Josh's designs and music have been heard locally at The Court, The Goodman, Steppenwolf, Lookingglass, Timeline, Lifeline, Next, Northlight, the Hypocrites, and Congo Square.  Regionally he has worked at Long Wharf, Hartford Stage, CenterStage, The Lincoln Center, The Kennedy Center, The Alliance, Kansas City Rep, Center Theatre Group, California Shakespeare, Oregon Shakespeare, Great River Shakespeare, Milwaukee Rep, and Illinois Shakespeare.  Josh teaches sound design for theatre and film at Northwestern University, is the recipient of four Joseph Jefferson Awards (one for Rose and the Rime), and an LA Ovation Award.  Josh is an artistic associate of the Lookingglass theatre, a collaborative artist with The Goodman, and the co-owner of Aria Music Designs, LLC, an audio design and rental company.  Check out www.horvathsound.com 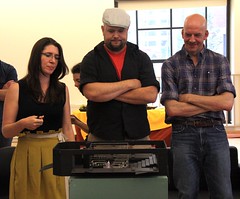