AGES: This production contains mature content. Recommended for ages 14 and up. More info in the Parents' Guide.

RUN TIME: 2 hours, 20 minutes. There is one intermission.

Diamond Dogs follows a 26th-century team of human scientists and soldiers as they investigate a mysterious alien tower, bent on brutally punishing all intruders. Uncovering clues and solving puzzles, each crusader will make dangerous, eye-popping sacrifices to get to the mysteries atop the spire. Blood will spill.

This thriller is one of 16 stories set in novelist Reynolds’s expansive Revelation Space Universe. Artistic Director Nathan Allen teams up with The House’s most inventive designers and guest artists to bring this unique universe to life. Body modification is the norm in the future, and award-winning puppet designer Mary Robinette Kowal, who is also an award-winning sci-fi author, articulates and re-shapes the actors’ human forms into powerful mechanized players battling for their lives.


Reynolds is one of a new generation of hard science-fiction authors, a craft he began after leaving his position as an astrophysicist with the European Space Agency. Diamond Dogs is a pure example of the "Deadly Maze Story," a staple of Science Fiction since H. P. Lovecraft. This world premiere production at The House Theatre of Chicago marks the first of Reynolds' works to be adapted for another medium. 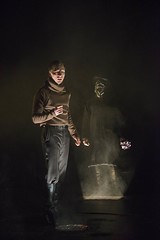 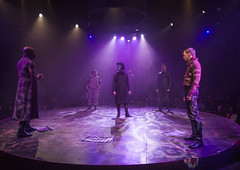 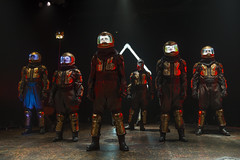 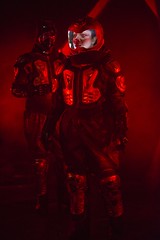 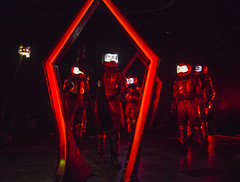 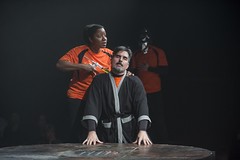 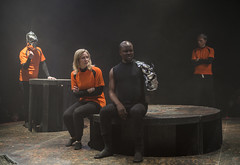 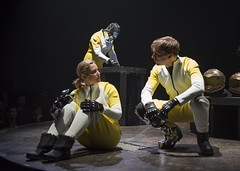 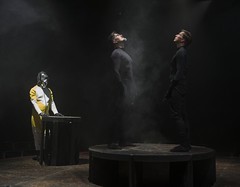 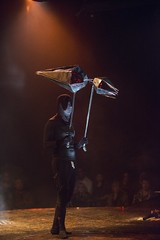 Flickr
Get a look inside the spire in this Diamond Dogs trailer!
A scene from Diamond Dogs

The tower comes alive as the team begins its ascent of the Blood Spire in The House's World Premiere adaptation of Alastair Reynolds's Diamond Dogs.

A scene from our sci-fi thriller, Diamond Dogs

Childe takes control (and a major risk) as the crew ascends the Blood Spire.

Setting the scene in Revelation Space...

Welcome to the Epsilon Eridani System.

This planet is called Yellowstone: so named by colonists escaping the frozen Earth of the First System, four centuries ago. The largest settlement here is Chasm City – a fusion of interplanetary human cultures enjoying a two­ hundred­ year period of unprecedented progress. A golden age commonly referred to as the Belle Epoque, when art, trade – especially science – ­ flourishes.

The families that developed these sciences enjoy vast wealth and influence launching many successful ventures from Yellowstone: colonies in other solar systems – scientific expeditions to the edge of human space. Visionary social experiments also began here – the most famous conducted by House Sylveste. The Sylveste Institute broke significant new ground in developing medical cybernetics and new treatments for the extension of the human lifespan.

But not without cost..

Join The House Theatre of Chicago for a fun and informative conversation before the show.  Special guest Alastair Reynolds, UK-based novelist and author of Diamond Dogs, is joined by adaptor Steve Pickering of the Chicago collective Shanghai Low, and Nathan Allen, Artistic Director of The House. Hear from Reynolds about his inspirations for creating his 'Revelation Space Universe' where Diamond Dogs is set, and from our Chicago-based artists about shaping this world premiere adaptation. Plus, we'll get Alastair to talk about his background as an astrophysicist with the European Space Agency, because that is just too cool to pass up!

WAIT. IS THIS AN ESCAPE PUZZLE-TYPE GAME OR A PLAY?

Diamond Dogs is a play on our mainstage.  Where the characters move through a sentient maybe-evil, maybe-not-evil spire discovering clues and solving puzzles to gain higher and higher level access to its secrets.

What ages do you recommend this show for?

We are recommending Diamond Dogs for ages 14 and up. Please check out our Parents' Guide from Director of Education and Outreach, Mike Smith.